Respect for the Road (and other Road Users)

When we moved to England I had heard the horror stories of Canadians (American’s too) picking up a rental car at Heathrow and travelling only a few miles before abandoning the vehicle because they could not grasp driving on the left side of the road, or they lost it when they could not master that first roundabout (in a clockwise direction).

I too was very nervous the first time out. I picked my rental car at Marble Arch (not Heathrow). The strategy was to take the Underground out of the city core. Marble Arch, I thought, would be in the west side enabling me to catch the A4 to go west toward Bath. Little did I know that Marble Arch is one of the busiest places in London. I had to learn real quick…

The roundabouts range in size from mini to the size of a large city block in Manhattan. You can think of a mini-roundabout as a single lane intersection in North America with a circle painted in the middle of the intersection. They grow in complexity from a single lane circle to multi-lane circles. Some have become so complex and burdened with so much traffic they have installed traffic signals to control the traffic. Then there are those nasty nested roundabouts and multi-joined roundabouts.

Have at look at this UK roundabout…

Now that we have moved back to Canada I miss proper roundabouts. I am pleased to see, however, roundabouts being installed in some locations throughout Ontario. One particular roundabout reminds me of Europe. It can be found on Townline Road in Cambridge, Ontario. Approaching this roundabout from the north there are two lanes entering the roundabout, making it just a bit more complicated for that unfamiliar Canadian driver.

You can see it here:

Once you drive pass the exit immediately before the exit you want, you should signal your exit from the roundabout. Again, Ontario drivers do not signal their intention. Everyone just drives. In Ontario I’m not sure what the kids are being taught when they approach these great ancient inventions—but we need to get it sorted. Any driving instructors (or police officials) want to comment?

While driving in England I had an impression that the English drive way too fast, that the law didn’t care, but road users were generally more polite then those found in Canada (that last comment is so TRUE).

The speeding comment was based on experiences such as driving on narrow crooked roads (with 90 degree turns) at 50 miles per hour—while traffic queued up behind me. Speed limits, in general, are nation wide. They have a national speed limit system. 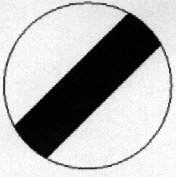 Though people break speed limits, the English roads, I think, are becoming safer. They have installed a record number of safety cameras (a.k.a. speed cameras). These are permanently installed or placed in mobile units that take a high quality image of you and your car if you break the speed limit. They are over the country.

The law does not care if you know where they are (ie. Go ahead and purchase a GIS system that tracks them, or buy a camera detector)… they want you to know where they are so you’ll slow down. They claim to make them bright yellow so you can see them when you approach them. Hmmm. If speed kills and you place one of these every 1 mile down the road you might just slow down. Hell, half them don’t work, but you won’t know which ones work from those that don’t work.

In Ontario, the government prevented our Ontario roads from being littered with these cameras. And, the road users are sure to show us that they don’t need or want them. I have never seen so many speeding road users. Eg. 110 km/hour is not uncommon up highway 24 from Brantford to Cambridge in the morning. For those of you not familiar with the speed limit here (and that includes you road users that actually drive on it) it is currently 80 km/hour.

As for my comment about the UK law caring… well, that just isn’t so either. They are out there in full force. In Ontario, I have seen a few cars pulled off the road getting their well-deserved ticket or warning. But, in general, their presence is not there. As I say, in general, I believe this is the case. There are exceptions. I have seen or heard of those days where they go out on a mission, focusing on a specific issue---two-day enforcement program. TWO DAYS—Okay, we will drive safely for just 2 days then. :(

One thing I have been proud of is the way Canadian officials have enforced drunk driving over the years. This is something England was very poor at doing. During the last 2 years however, this has been changing.

Now it’s time to crack down on bad habits, poor driving, impatience on the road, and just plain ignorance of the road rules. I heard on CHUM FM news last week that Toronto had 20+ deaths due to pedestrians being hit by cars. Why… I bet being impatient was a big part of it. “I didn’t see them.” This means I didn’t stop my car and couldn’t be bothered to wait to see who else might be actually using the road.

Instead of waiting to put the pedal to metal at the next red light, observe the other users of the road and to see how they use it. See how many cars you can count that stop at a red light before proceeding to turn right on that red light. Stop means your wheels come to a complete stop (not over the cross walk). Hell, I watched 12 cars in a row not even slow down at the corner of Franklin Road and Chaplain in Cambridge. Did the laws in Ontario change in the past 6 years. Oh, hell, yes, you can turn right on a red as long as you beat the other guy to the intersection… and hell, you are already there... so go.

Come on—let’s enforce the rules. Put the cops back on the road and start fining drivers and maybe drivers will get the message. And, believe me, the officials will be rolling in the revenues.

This week I had a driver turning left in front of me at an intersection. However, he had to floor the engine and race his vehicle to get between the driver in front of me and my car. Can you picture this… as he guns it he now sees a pedestrian crossing the street where he wants to exit the intersection. I had no chance of stopping. I managed to squeak behind his car.

Watch these videos and listen to these mp3's (all of them) -- and pass these links on to your friends... SLOW DOWN and don't be one of those drivers...

Teenagers are most likely to be killed

Teenagers are most likely to be killed 2

Teenagers are most likely to be killed 3

Recorded on someone’s mobile phone… very real…
Posted by Craig at 6:09 pm No comments: Links to this post